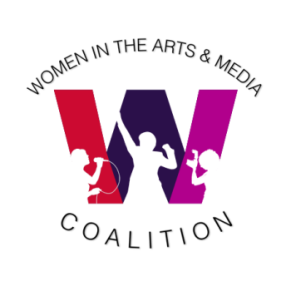 
NEW YORK CITY - The Women in the Arts & Media Coalition has announced the winners of the 2013 Collaboration Awards. The Collaboration Awards, which recognize women who successfully collaborate across disciplines to create new and influential work, will be presented at the Awards Gala on Thursday, October 24th at Baruch Performing Arts Center's Engelman Auditorium in New York City. Madeleine Smithberg, Emmy and Peabody Award winning co-creator and original executive producer of The Daily Show with Jon Stewart, will keynote the evening's Gala.


The 2013 Collaboration Award winners are writer/actress Jane Edith Wilson and writer/filmmaker Grace Lee for their political mockumentary film Janeane from Des Moines. This is the first time the Collaboration Award has been awarded to a film and filmmaking team.


"All three of these collaborations are groundbreaking triumphs of both content and form," said Shellen Lubin, co-president of Women in the Arts & Media Coalition. "For the Coalition, collaboration is particularly important to acknowledge for two reasons: 1) as women are breaking down barriers in all these different disciplines, they have too often been the only woman on the creative team, and we want to honor women who choose to work with other women; and 2) we have been learning for awhile how women collaborating with other women often work together differently than men do with men, and even moreso, than men do with women. That is why the most fascinating part of the Gala is to hear these bright, talented, extremely accomplished women talk about their unique, ever-evolving collaborative processes."


Collaboration Award winning film Janeane from Des Moines seamlessly merges documentary film with fiction in a political mockumentary shot on the actual 2012 Republican campaign trail. It follows "Janeane," a vulnerably imagined member of the Tea Party, as her job, health insurance status, community, and family all disintegrate around her, propelling her to follow actual conservative candidates, including Mitt Romney and Rick Perry, in search of answers to her problems, and begging the candidates to save small American families like hers.


"We are so honored to be accepting this award. One of the best aspects of making this very unconventional film was working together. We are two women who brought different skills sets to the table. We got it done using our creativity, mutual respect for one another, quality Skype-time with our families back home, plain old hard work, and as much good humor as we could muster. It means the world to us to have our film embraced by an organization that celebrates women in collaboration," said Jane Edith Wilson and Grace Lee, co-creators of Janeane from Des Moines.


Both the Honored Finalist and Honorable Mention Award winners are plays. Silent Witnesses is based on interviews and conversations with child survivors of the Holocaust. It presents a group of older women in California who, as young children, were hidden and saved from the Holocaust by various means. Finding each other, coming together, and discovering their sisterhood allows them to give voice to memories long hidden inside themselves; while all the unique women are portrayed exquisitely by one actor, the playwright Stephanie Satie.
Honorable Mention The Island of No Tomorrows is a play with music set on the fictitious island nation of “Fortuna,” a fantastical land created by one father who wants his terminally ill, motherless daughter to grow up only with women, only with the word yes, and with no words spoken, only sung. As his attempts to construct an idealized childhood for his daughter fall apart, both his daughter and her caretakers rebel in surprising ways. The play with music revolves around themes of political oppression, sexual subjugation, and gender imbalance of power.
All six winners will receive their awards at the October 24th Awards Gala, during which all three teams will discuss their collaborations and Wilson and Lee will show excerpts of Janeane from Des Moines. The Gala will also feature keynote speaker Madeleine Smithberg, the Emmy and Peabody Award winning co-creator and original executive producer of The Daily Show with Jon Stewart and founder and president of Mad Cow Productions. Smithberg will share her experiences of success in collaborating with other women writers, including Lizz Winstead on The Daily Show with Jon Stewart, as well as launching a new YouTube comedy channel and her own collaborative female digital comedy entity Moo, which will showcase the work of young internet comedy content producers and comediennes.


A limited number of tickets to the Awards Gala are available to the public. Ticket prices are: $20 for members of any of the Coalition's member organizations / $25 for non-members (early bird rate before October 10), $30 after October 10; $35 at the door. Tickets can be purchased online at www.womenartsmediacoalition.org.


Awarded every second year, the Collaboration Awards encourage professional women in the arts and media from different specializations to work collaboratively on the creation of new work. The award recognizes the best of these collaborations and goes to a winning project and its two creators. In addition to the top honor, an Honored Finalist Award and Honorable Mention Award
are also presented to two additional projects and their creator teams. 2013 marks the fourth time the Collaboration Awards have been presented. Past winners are: playwright Stefanie Zadravec and director Daniella Topol for their collaboration on the play The Electric Baby (2011); writer Jennifer Gibbs and director Kristin Marting for the play The Stranger (2008), and playwright Jennifer Maisel and director Wendy McClellan for the play Birds (2006).


Women in the Arts & Media Coalition is a non-profit organization, which represents more than 80,000 women and men in the performing arts and media through its member organizations and affiliates. The Coalition focuses the power of its member organizations and their memberships together and uses the combined strength to address issues of concern through advocacy, networking and educational events. Member organizations are: Actors' Equity Association, Dramatists Guild of America, League of Professional Theatre Women, SAG-AFTRA New York Local, Stage Directors and Choreographers, New York Women in Film & Television, and the Writers Guild of America, East. Affiliates are: WomenArts, The Rehearsal Club, The Women's Media Center, Women Make Movies, Dancers Over 40, and Professional Women Singers Association. For more information on Women in the Arts & Media Coalition, visit www.womenartsmediacoalition.org.


Bios of the Winners:


Grace Lee (Women Make Movies) is an award-winning writer/director and producer of both fiction and non-fiction feature films. Her credits include The Grace Lee Project broadcast on the Sundance Channel, American Zombie, Janeane from Des Moines, the forthcoming American Revolutionary, and The Evolution of Grace Lee Boggs, which is currently on the festival circuit and will be broadcast in 2014 on PBS.


Jane Edith Wilson (SAG-AFTRA) is an acclaimed and award-winning writer, actress and producer, with works in television, film and theater. She played “Connie” on Bravo’s Significant Others and appeared on Frank TV, Curb Your Enthusiasm, Seinfeld and ER. Her film credits include Catch Me If You Can, American Zombie, and Eight Legged Freaks. Wilson has received a Drama-Logue Award for Best Lead Actress in The Houseguest, and her musical, The Ultimate Man, received an acclaimed production in London’s West End.


Stephanie Satie (AEA, SAG-AFTRA, DG) is an award-winning actress, playwright and scholar. She has appeared, first as a dancer, then an actress on and off-Broadway, in regional and L.A. theatres, internationally and on television. She received three grants from the Los Angeles Department of Cultural Affairs for her solo plays Refugees and Coming to America – Transformations, both directed by Anita Khanzadian. She is a member of Interact Theatre Company in Los Angeles and is currently performing Silent Witnesses on both coasts.


Anita Khanzadian (SAG-AFTRA, AEA, SDC) is a director, a founding member of the American Renaissance Theatre in New York City, and a longtime member of Interact Theatre in Los
Angeles and director of Interact Theatre's play lab. A recipient of two Los Angeles Drama Critics Awards for direction, as well as Drama-Logue and Ovation Awards for direction and best ensemble work, she has also directed other one-person plays including Elizabeth Perry's Sun Flower and James Gleason's Vietnam memoir, Actor Under Fire. Silent Witnesses is her third collaboration with Stephanie Satie.


Honorable Mention: Fengar Gael and Lorca Peress for The Island of No Tomorrows


Fengar Gael (DG, LPTW) is an award-winning playwright and Sundance Playwright Lab Fellow. Her credits of produced and in-production work include: The Judas Tree (also directed by Lorca Peress), The Island of No Tomorrows (winner of the Multi-Stages New Works Award), The Portraitist, Devil Dog Six, and Soul on Vinyl. She is a recipient of the Craig Noel Award, the Playwrights First Award and has commissions from South Coast Repertory, the National New Play Network, and a playwriting fellowship from the California Arts Council.


Madeleine Smithberg (WGA) is the Emmy and Peabody Award winning co-creator and original executive producer/show runner of The Daily Show with Jon Stewart, as well as the founder and president of Mad Cow Productions. She has created and produced comedy projects for a wide variety of networks including Showtime, History, TBS, Fox, Bloomberg, Nickelodeon, CNN, and BBC America, as well as created and launched a successful news franchise, INFOmania, for Al Gore’s Current TV. She recently earned an NAACP Image Award nomination for the BET late night show Don’t Sleep!. She is currently serving as consulting executive producer for the internet company Fullscreen helping to launch a YouTube comedy channel, as well as developing her own collaborative female digital comedy entity, called Moo.
at October 02, 2013

Just Added to the Coalition Communal Calendar (August and September)