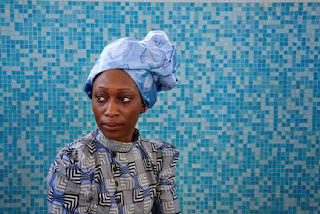 New York, NY, May 21, 2014 –  Women Make Movies is proud to announce the acquisition of THE SUPREME PRICE for its 2014 New Release collection. The film will be playing at six film festivals nationwide including a special pre-festival press screening on May 29th at the IFC Center and will have its premiere at the Human Rights Watch Film Festivals in Chicago & New York.

Shedding light on the recent history of Nigerian politics, THE SUPREME PRICE gives us a deeper understanding into the current human rights crisis in Nigeria regarding the kidnapping of over 200 girls by the militant Islamist group Boko Haram. Joanna Lipper's extraordinary film is a feature length documentary that traces the evolution of the Pro-Democracy Movement in Nigeria and efforts to increase the participation of women in leadership roles. Following the annulment of her father's victory in Nigeria's Presidential Election and her mother's assassination by agents of the military dictatorship, Hafsat Abiola faces the challenge of transforming a corrupt culture of governance into a democracy capable of serving Nigeria's most marginalized population: women.

In this riveting thriller, politics in Nigeria is a do or die affair. Filmmaker Joanna Lipper combines daring reporting, exclusive interviews and behind-the-scenes access shot during numerous trips to the unstable country with incredible, heart-stopping archival footage from some of the nation's most tumultuous, violent and corrupt periods during the past fifty years. A startlingly intimate rendering of the epic and tragic Abiola family saga set against the backdrop of the landmark 1993 Presidential Election and its aftermath, THE SUPREME PRICE provides a unprecedented look inside of Africa's most populous nation, exposing a deep history of political corruption and a culture where a tiny circle of political elites monopolize billions of dollars worth of oil revenue while the vast majority of 165 million Nigerian people remain impoverished.  This film highlights the courage of human rights heroine, Kudirat Abiola who died a martyr.  In present-day Nigeria, her enduring legacy inspires her eldest daughter, Hafsat, and a small, empowered group of Muslim and Christian women to work together in solidarity.  These women put their lives at risk to offer a glimmer of hope and the potential for growth, change and a new style of leadership to an ethnically and religiously divided country that has seen its potential for greatness unrealized since gaining independence from Great Britain in 1960.

THE SUPREME PRICE was produced with the assistance of WMM's renowned Production Assistance Programs which helps women filmmakers get their films on to the screen. Other films in the 2014 Human Rights Watch Film Festival New York that came from the program include E-TEAM, WATCHERS OF THE SKY, SEPIDEH, OUT IN THE NIGHT, and DANGEROUS ACTS STARRING THE UNSTABLE ELEMENTS OF BELARUS.

Women Make Movies looks forward to handling sales and distribution of THE SUPREME PRICE in the US and Canada.

THE SUPREME PRICE will premiere at the Human Rights Watch Festival Chicago:
Tuesday, June 3, 2014 at 6:30 pm CST
at Gene Siskel Film Center
• The screening will be followed by a discussion with filmmaker Joanna Lipper

THE SUPREME PRICE will have its New York festival premiere at Human Rights Watch Film Festival New York:
Thursday, June 19, 2014 at 9:15 pm EST
at Film Society of Lincoln Center's Walter Reade Theater
• The screening will be followed by a discussion with filmmaker Joanna Lipper and film subject Hafsat Abiola
• Presented with: Gucci Tribeca Documentary Fund's Spotlighting Women Documentary Award in partnership with the Kering Foundation, tribecafilminstitute.org
Director Joanna Lipper Available for Interview from Boston now, and from New York and other cities in the coming week. For more info visit: www.JoannaLipper.com
Film subject Hafsat Abiola will be Available for Interview in NYC during the Human Rights Watch Film Festival

About Women Make Movies
Since our beginnings in 1972, WMM has grown from a feminist filmmakers' collective into an industry-leading nonprofit media arts organization and distributor. For over 40 years, WMM has transformed the landscape of filmmaking for women directors and producers, bringing the issues facing women around the world to screens everywhere. Now, with more than 550 films in our catalog, including Academy®, Emmy®, Peabody and Sundance nominees and award winners, WMM is the largest distributor of films by and about women in the world. Women Make Movies. By Women. About Women. For Everyone.