with Estelle Parsons and Gretchen Cryer on video 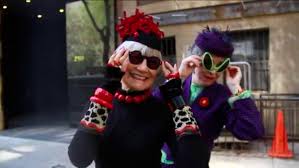 Screening of ADVANCED STYLE
plus THE THREE OF US,
a new short film starring Leslie Uggams
and presentation of the 1st Elsa Rael VintAge Award
to Morgan Jenness
by Tisa Chang
includes a reception and networking
at MIST Harlem

read the article from Broadway World: http://www.broadwayworld.com/article/Women-in-the-Arts-Media-Coalition-to-Host-VintAge-1018-at-MIST-Harlem-20141010
VintAge celebrates the voice and vision of women in the arts and media as they age. This year's VintAge features a about older women with their own personal styles and philosophies, and a short, JUST THE THREE OF US, starring Leslie Uggams. The event will also have an esteemed panel (t.b.a.). Estelle Parsons and Gretchen Cryer will be speaking in recorded videos. Tisa Chang (Artistic Director, Pan Asian Rep) will then be presenting the 1st Elsa Rael VintAge award to Morgan Jenness, agent & dramaturg, for her advocacy work on behalf of playwright Maria Irene Fornes, which will be followed by a reception and networking.

This year's VintAge features the 1st Elsa Rael VintAge Award Winner for advocacy for women in the arts & media as they age being presented to Morgan Jenness, dramaturg & agent, for spearheading the cause célèbre that has protected Maria Irene Fornes and her playwriting work in her elder years. The award will be presented by Tisa Chang, artistic director of Pan Asian Rep. There will also be pre-taped personal statements made about Elsa Rael and the importance of celebrating women in the arts and media as they age by Estelle Parsons and Gretchen Cryer.

It will be an afternoon both entertaining and illuminating, beginning with the new documentary, ADVANCED STYLE,
by Lina Plyoplyte, the story behind the fashion blog which became an international phenomenon (70 minutes); and JUST THE THREE OF US, a short film by Angela Tucker starring Leslie Uggams (15 minutes).

Following will be a panel on breakthroughs and issues of women aging in the arts and media moderated by Isa Goldberg, President of the Drama Desk; panelists include Barbara Davis, COO of the Actors Fund; Morgan Jeness, agent & dramaturg; Tisa Chang, Artistic Director of Pan Asian Rep; Liz Rosenberg, poet/novelist; Yvonne Curry, choreographer/director.

The award presentation will then be followed by a reception and networking. Hosts for the day will be Co-Presidents of the Coalition, Shellen Lubin and Avis Boone.

Presented by the Women in the Arts & Media Coalition, and co-sponsored by NYWIFT, SAG-AFTRA, Dramatists Guild, and the League of Professional Theatre Women.

A comment from Estelle Parsons about women in the arts & media, and about being one of the women in the vanguard pre-feminism (cinematography by Brent Katz)


A comment from Gretchen Cryer about the lead character of her (and Nancy Ford's) new musical "Still Getting My Act Together ..." (cinematography by Brent Katz)